Travelers will have noticed a series of steel pillars and concrete panels rising out the ground along South State Street. These will form the interior support for two new retaining walls that will allow the expansion of New Haven Line service at the Stamford Station. As part of the Atlantic Street Bridge Replacement project, the larger bridge will allow for construction of an additional westbound rail track approaching the station, Track #7. This new Track #7 will be used exclusively for branch track service. At present, there is no dedicated local track to service the New Canaan and Danbury lines at the Stamford Transportation Center. Instead, local trains must utilize the existing tracks and platform while approaching, loading, unloading, and departing from the existing platforms. The presence of the local train reduces through train movement and creates a greater potential for delays.

Once the new bridge is installed, Track #7, along with a dedicated platform and egress stairways to South State Street, will be constructed so local trains will have their own inbound/outbound station access. For rail commuters, it is expected that improved operational efficiencies will occur for local, express and through trains.

To support the additional track and platform, these new retaining walls are being constructed along South State Street between the train station and Canal Street. This requires several consecutive operations to occur simultaneously in order to progress the job. The first phase involves drilling anchors through the existing retaining walls, which are still needed to support the active tracks. These anchors will eventually help support the new walls. Casings are pre-drilled into the existing wall and fitted with specially designed anchors. The hole is then filled with grout. Each anchor is then individually tested to assure the required strength.

At the same time, two foot diameter shafts are being drilled into the ground at regular intervals to form the base of the new walls. Once the shaft is drilled, large steel piles are installed and the shaft is filled with concrete. Once the steel is erected, large precast concrete sections are fitted between each set of piles to create the wall facing. Upon completion, the space between the new wall and the existing wall will be backfilled, the simulated stone facing will be applied and work on the new platform and track can begin. 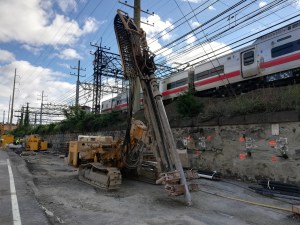 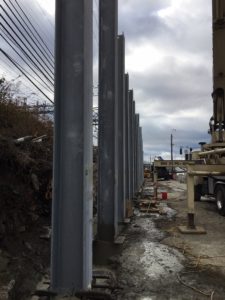 H-piles are set along South State Street for the new retaining wall. 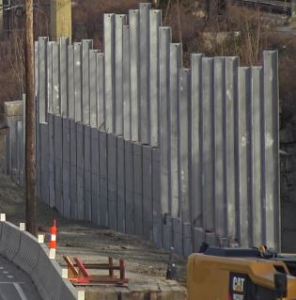