The Countdown Begins! 36 Days Remain Until The New Metro North/Atlantic Street Bridge Is Rolled Into Place

In 36 days, the Metro North/Atlantic Street Bridge will begin its installation journey to replace the existing bridge that was built more than a century ago. The new bridge is expected to be rolled into place during a 9 day period starting June 28 through July 8, 2019 with intermittent local road closures, detours, pedestrian detours and special Metro North bulletins and announcements for rail service.

Motorists, pedestrians and those traveling in the Stamford area have seen the new bridge taking shape in two off-site construction areas near the job site. Utilizing Accelerated Bridge Construction to reduce construction time and minimize traffic impacts, one area is located near Elm Street and the second site is adjacent to the existing bridge on Atlantic Street.

Once the concrete is placed over the massive steel girders, each 70-FT span will weigh in at approximately 1.4 million pounds each!!! The concrete will be allowed to cure, the forms removed and the spans readied for transport to the job site. Special self-propelled modular transporters (SPMT’s) will use hydraulic power to raise the bridge spans off the temporary foundations and move them, span by span, into place. Over the 9 days of the roll-in, construction crews will be working 24/7 to demolish the existing bridge in stages and replace the old with the new. In this way, two tracks will remain active and rail service will still be operable under a special schedule issued during the roll in period.

Construction operations continue at the Atlantic Street bridge site to prepare the bridge substructure to accept the new bridge. This work includes constructing new bridge abutments and a center pier as the new bridge is wider and longer than the existing structure. Roadway work on Atlantic and South State Street continues after the bridge is rolled in until September 8, 2019 when all roads are expected to re-open. 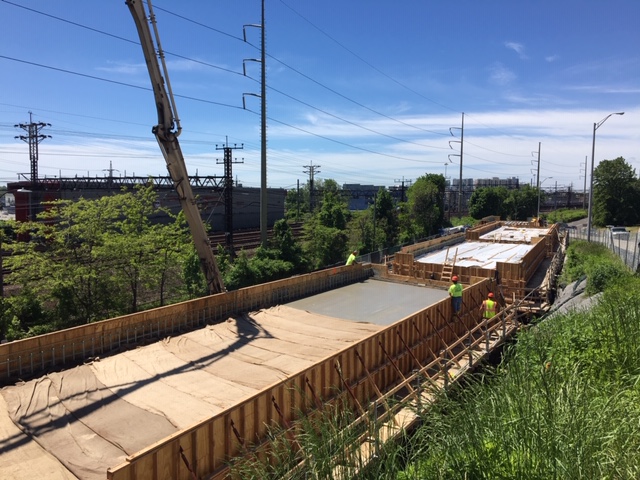