and Metro North Schedule Changes to be in Effect starting on/about June 28, 2019 in Stamford

The Connecticut Department of Transportation is announcing that temporary closures and detours for I-95 NB Exit 8 Off Ramp and Local Roadways, pedestrian detours and Metro North Railroad schedule changes will be in effect starting on or about June 28, 2019, to install the new replacement Metro- North/Atlantic Street Bridge. Roadway improvements are scheduled to continue until September 8, 2019.

Effective on or about June 28, 2019-July 8, 2019, residents, commuters and the traveling public are advised that the new Metro North/Atlantic Street Railroad replacement bridge will be installed in a sequenced operation that will involve the closure of local roadways only. Metro North will issue schedule changes for this time period via bulletins and station announcements. Rail service is expected to be fully restored by July 8, 2019.

Following the bridge installation and continuing until September 8, 2019 Atlantic Street, between North State Street and Dock Street remains closed; South State Street, between Guernsey Avenue and the Northbound Exit 8 I-95 touchdown ramp on South State Street remains temporarily closed and Guernsey Avenue remains north bound only. During this period, Atlantic Street, under the bridge, will be widened to accommodate 3 southbound and 3 northbound lanes and lowered to increase the vertical clearance under the bridge to 14’6” to better accommodate commercial and emergency vehicles. It is expected that on September 8, 2019, all surface roads will re-open.

Effective June 28, 2019-July 8, 2019, intermittent road closures are expected on South State Street between Elm Street and Atlantic Street and on Dock Street between John Street and Atlantic Street. Intermittent closures of the I-95 Exit 8 NB off ramp should also be expected. Metro North will be announcing schedule changes during this time. Commuters are advised to check Metro North for train service bulletins and platform announcements. It is expected that full service will be restored by Monday, July 8, 2019.

Detour signs will be posted on Washington Blvd., Henry Street, Dock Street, Station Place, Jefferson Street, Canal Street, N. State Street and Atlantic Street. Variable message signs will be utilized to advise motorists of traffic conditions in the area. Motorists should be aware that modifications or extensions to this schedule may become necessary due to weather delays or other unforeseen conditions. 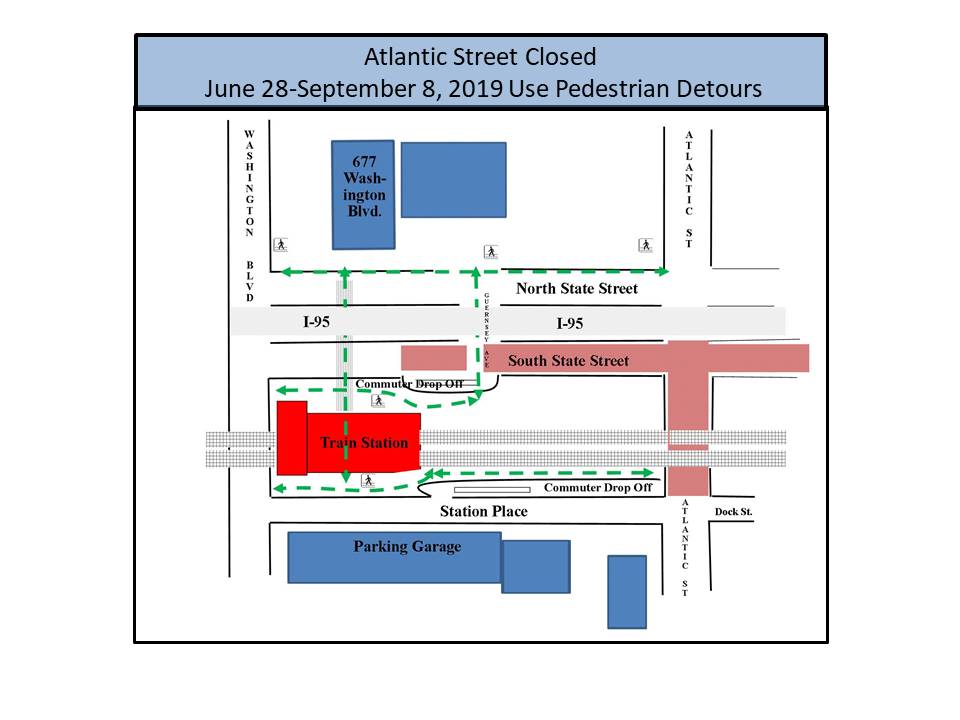